I haven't done a 'Creative Wednesday' post for a while, but here are a couple of little festive makes I thought I'd share.
I was making some Christmas shortbread biscuits for a friend of mine, and Mr Kitsch, in a stroke of genius, suggested that I make them into buttons. I pressed a smaller circle with a mini jam jar, and poked the holes through with a skewer. Hey presto - cute button biscuits for my button-loving friend!

Last year I made some tree decorations from plastic Hama beads (a.k.a.Pyssla beads or Perler beads). I wasn't sure about them. I liked them, but they didn't seem to look right on our tinsel tree (we're so classy). This year, I realised that they were waterproof and could therefore be hung on the conifer outside our front door. I was pretty pleased with the result, even though I could probably have done with a couple more. As you can see they have survived the snow, and still look festive. 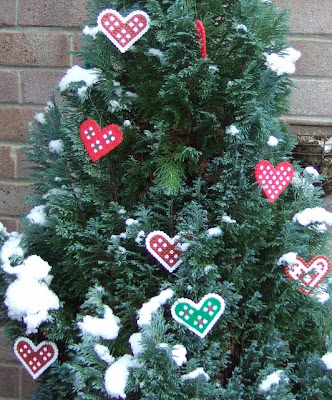 And finally, more Hama beads, on my Christmas cards (which you may also have seen last year). These are tiny Mini Hama beads, so this little tree is only about an inch and a half tall. And I love old Dymo tape! 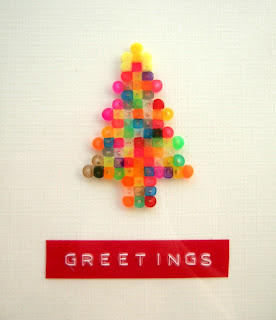 Posted by Kitsch and Curious at 02:15 5 comments: Links to this post 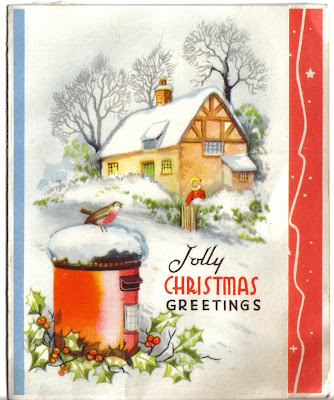 More scans from my card collection for you. Today's theme is snow-covered cottages. Apologies if you are currently stranded in a snow-covered dwelling of any kind. They might not seem so appealing to you, under the circumstances. 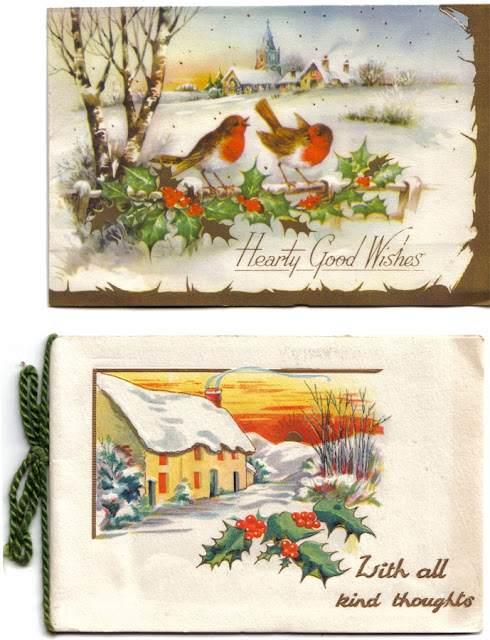 Cottages appear quite a lot on greeting cards of the 1940s, sometimes surrounded by summery flowers, and sometimes in snow scenes like these. I'm not one of these people who long to live in a country cottage. I've spent time in cottages, and generally found them to be cold and dark, and not somewhere I want to live in real life. 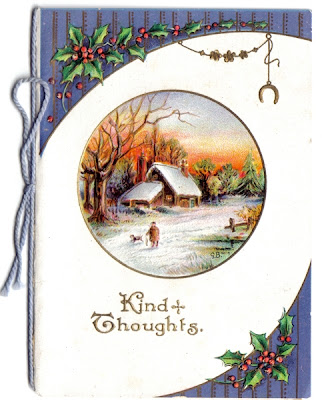 However, I find these sort of illustrations to be very charming, and almost unbearably sweet, in their portrayal of idyllic country scenes. Who wouldn't want to walk home in the snow to these cosy cottages, with their smoking chimneys telling of warm firesides and home baking?
I find vintage Christmas cards have an surprisingly strong emotional impact on me, if I let them. Something to do with that impossibly perfect Christmas that we've all been brought up to believe in? A vision of the happy home and endless contentment? They just seem so... sweet. I can't think of a better word.
I don't why these old cards seem so much sweeter and more innocent that today. People are not really any different, and the sender of those 'Kind Thoughts' might have been an insincere neighbour who kicked your cat. Or the one who wished you 'Happy Days' might have been a grumpy aunt who picked the first card out of the box.
But I just see the pictures, and enjoy the idyll. 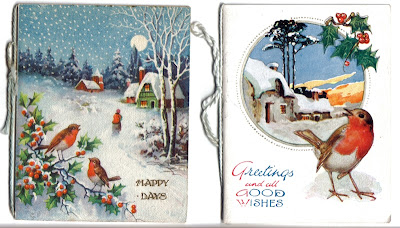 Posted by Kitsch and Curious at 01:50 5 comments: Links to this post 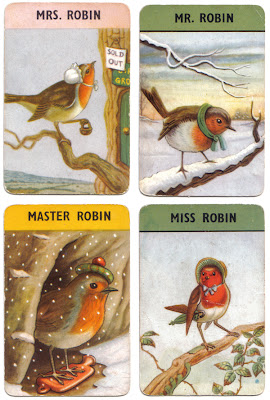 I'm feeling pretty Christmassy now, as I have no more fairs and markets to attend, and have sent out all the orders from my shop. Yay!! Now all I have to do is to get my Christmas shopping done and the cards sent! I hope I'm not too late, like poor Mrs Robin on the card above. These are from a lovely set of Happy Families I got earlier in the year. The illustrations are delightful, with details like Master Robin's hot water bottle (I know how he feels!).
The pictures below are from my ever-growing collection of vintage greeting cards. I do love a good snow scene, and as I'm in a holiday mood, I'll try to share a few more with you over the next week. (Judging from the forecast, we might have some real snow scenes too....) 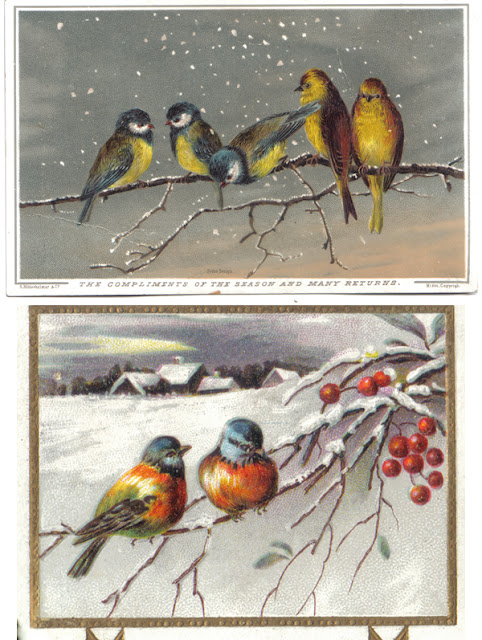 Posted by Kitsch and Curious at 02:06 7 comments: Links to this post 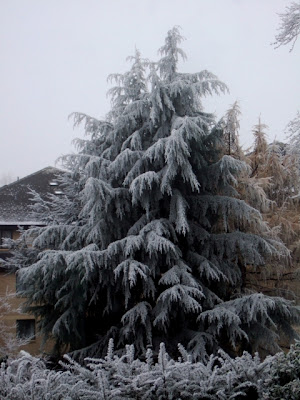 I know it's a bit late for the frosty pictures, but I've just got around to uploading these, and thought I'd share. These were taken from the bedroom window. 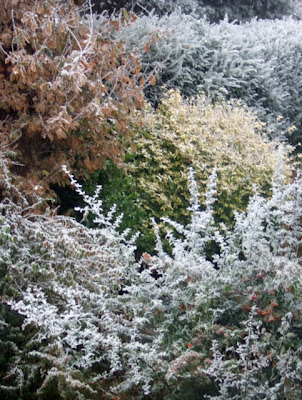 This was a day later when the sun was shining and making the treetops sparkle like Christmas cliches. 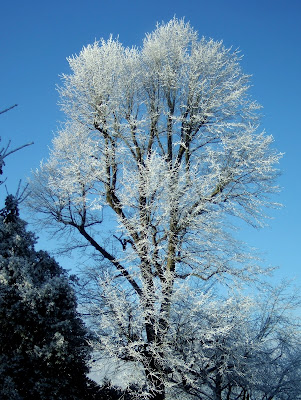 What with the weather and all, it's felt very Christmassy, and last weekend we went to a few Christmas fairs, and then popped in to see a craft fair at Ashton Court. In the park there, they have deer, and from a distance, I think you can pretend they're reindeer... 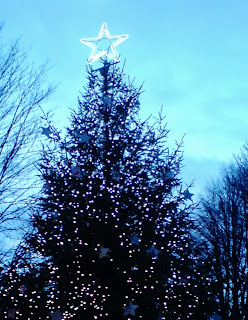 We've also had the fun of starting our advent calenders. Unfortunately, I went shopping a bit too late, and I couldn't find a nice one that I liked. So I ended up with this one.

I got it from a pound shop for 38p. Even in a pound shop, they didn't have the nerve to charge a pound for it. They didn't even have the nerve to charge 39p for it. Just 38p. 38p's worth of fun. It is huge - about two feet tall, but the art work is possibly the worst drawing I have ever seen. It's so bad, it made me laugh, which is why I got it.
I wondered if it had been drawn by a child, but I don't think so.  And why is it such a complicated cut-out shape? Look carefully - the outline of the clock actually bulges out around the figures on it.
Look at the creature below. Is it a monkey or a bear? Why is there a lump of wood behind his head? 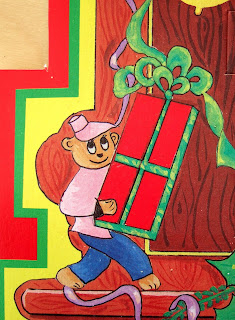 The drawings inside the windows are actually quite normal, which is a slight disappointment.
And my last piece of random nonsense - a photo I took at snack time in the afternoon, a visual poem in praise of Tunnocks Caramel Wafers. I particularly love that on every packet it says that they make 5 million of these wafers every week! Five million??? I can account for part of that, but who is eating the other four million? 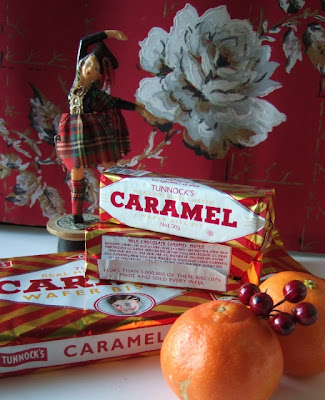 Winter Afternoon or Still Life with Tunnocks
Oh, and a quick, very late reminder that I will be selling at the Folk House ﻿on Saturday 11th December!
Posted by Kitsch and Curious at 23:57 8 comments: Links to this post