Crochet is so now 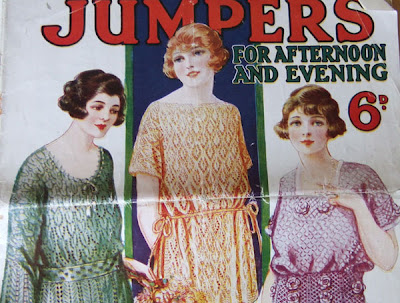 Everyone seems to be learning crochet these days. There's even a new magazine, I see, that apparently teaches you how to make a not-very-nice blanket. That aside, I'm glad that so many crafters are picking it up. I've long been a crochet fan, and I much prefer it to knitting, as I find it faster and easier.

I learnt crochet when I was 10 years old in junior school, when we were shown how to make granny squares, which our teacher sewed up into blankets 'for poor people'. I have no recollection of who these 'poor people' were - I think they were 'abroad', probably in India or Africa. Whilst I can't remember the cause, I vividly remember making those crochet squares. It was the seventies and the colour combinations reflected the times. My favourites included brown and orange, turquoise and brown, and royal blue and turquoise. This model from one of my vintage craft books appears to have used some of my designs! 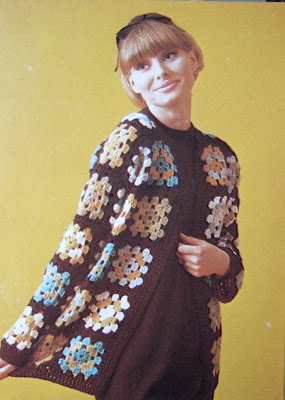 In those days, we had a local haberdashery near where I lived (goodness, that sounds like a different, magical age, doesn't it?). The two old ladies who ran it had obviously decided to get 'with it', and amongst all the pastel baby yarn, there was a basket of yarn in incredibly bright colours. It loudly proclaimed its man-made, acrylic status in neon shades of orange, pink, turquoise and yellow. You could get a static electric shock just by looking at it. However, it was catnip to 10 year olds, and once I took some to school, I ended up having to buy countless balls of the stuff for my classmates. When the blanket-making ended, I carried on crocheting and made myself a long scarf of granny squares. There might have been a long waistcoat too...

I had learnt to knit as well, of course, but it always seemed so slow. I think this was probably the effect of one of my mum's projects. My poor mum never got enough time to sit and do the crafts she loved, so her own projects (as opposed to making toys or clothes for her children) always seemed to carry on for years. At some point she decided to knit an Aran cardigan. This cardigan, and the accompanying large carrier bag of cream wool, was a work-in-progress for many years. I think she'd just about completed the left front when I joined in. She showed me how to do cabling, which was fun (and there was only one that went the wrong way), but the back and sleeves were in a fairly plain stitch that just went on and on.

Over the years, my mum, my sister and I all knitted bits of that damn cardigan. I can't even remember how it got finished, but I think by then I'd done most of the knitting, and so I claimed it as mine. God knows what size it was meant to be - it was far too big for any of us, but by then it was nearly the 1980s, and ridiculously oversized knitwear was acceptable dress for a would-be art student. When I was a student, I remember it being the warmest thing I owned, which was useful in draughty, under-heated student accommodation. 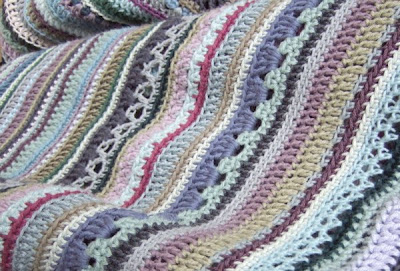 So that's probably why I prefer crochet, and probably why I generally avoid making clothes, and prefer to stick to scarves, throws, blankets, baskets, lampshades, etc,

I've just got to end of a crochet project that threatened to become endless, as I just couldn't stop. This throw/blanket (above and below) has been an on and off project for a couple of years, as I just kept making it bigger and bigger. But I finally decided it was time to stop. (Although I'm tempted to add another round of edging...) It's very heavy, as it's all cotton. It wasn't until I threw it on the sofa for a quick photo, that I realised how well the colours match the framed fabric on the wall. An unconscious match, as I originally intended putting it on the bed. 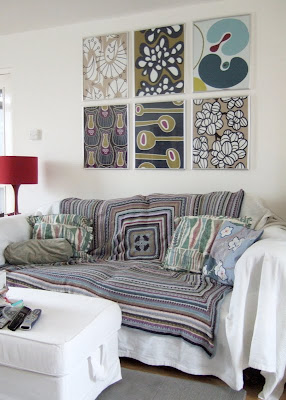 It's made me keen to do more colourful crochet, so I'm going to work on some small items. It would be nice to make some items to sell, but we'll have to see... 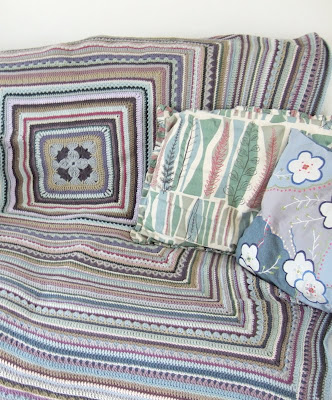 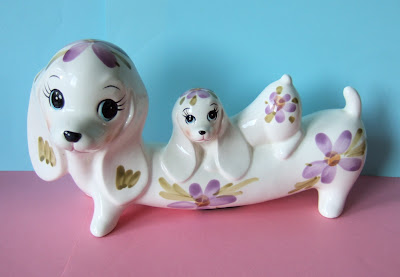 I must admit I haven't worked very hard this week. Well, you have to go out in the snow, don't you? (I found this sausage dog!) And then there's lots of catching up to do with blogs and such. I didn't even manage to do that thoroughly, as I spent far too much time browsing through photos of wonderful vintage stuff on Flickr. When I saw a beautiful old box of 1950s Christmas crackers, I wondered if the owner had looked at the toys inside. It suddenly came back to me how I used to do that as a child.

I used to enjoy laying the table for Christmas dinner, because we had serviettes (they're always called paper napkins nowadays, aren't they?) and crackers. As an aside, I remember a period when I used to fold the serviettes into waterlilies - where on earth did I pick that up from? Anyway, at some point I discovered that I could ease open a cracker to check what was inside. The crepe paper and its foil overlay could be pushed back afterwards to hold it closed and no-one was any the wiser. With this new, god-like power, I could decide who got which toy! I could laugh in the face of the Cracker Fates, who might give me a racing car; I was going to get a fortune-telling fish, or a tangram puzzle at the very least. Everyone else got whatever I deemed appropriate. Or in the case of my brothers, what I thought they deserved. As it was Christmas, I would probably have had a fight with one of them before lunchtime, and he could be punished by giving him the cracker with the pouting red plastic lips.

Apart from feeling slightly embarrassed by my childish vindictiveness (well, kids are horrible, aren't they?), it made me wonder why I never regretted 'spoiling the surprise'. Over the years, I've come to the conclusion that I don't really like surprises very much. Maybe this is borne out by another childhood tradition - searching for Christmas presents. My brothers and I soon learnt my mum's hiding places (bottom of the wardrobe, back of the pantry), and would poke about for toys in the weeks before Christmas. 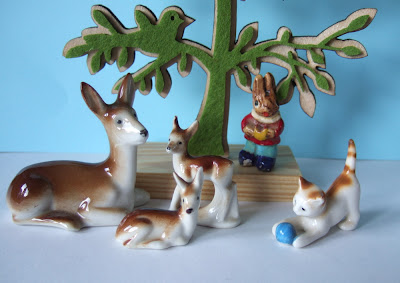 Of course, there are nice surprises. I had some lovely surprises from Mr Kitsch at Christmas, including the kitschy china animals above and the Moomin things at the bottom of this post. And a special surprise as Mr Kitsch had a go at embroidery, and created this wonderful picture of Moomintroll. I was staggered by how good his stitching is for a first attempt!! 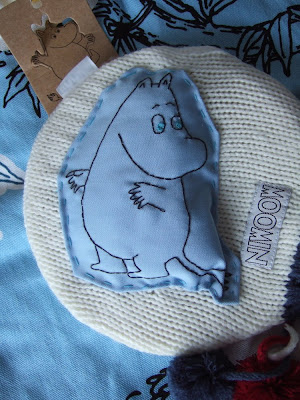 I'm glad to say Mr Kitsch knows me well enough to get the right presents. He also knows me well enough to never spring a large surprise on me. A surprise holiday? It would freak me out. No time to plan or pack and no say over where to stay. I'd much rather plan a holiday together. A surprise party? Why? Does the surprise increase the fun? Probably only for the planners. A friend of mine was on the receiving end of a surprise party planned by her husband. She came home to find all the guests lying in wait in her living room. After the initial shock, all she could think about was "Did I clean the toilet?". The rest of the time she was worrying about not having tidied up.

Many years ago, Mr Kitsch planned a romantic surprise for me. We'd been living together for a few years and he decided a surprise 'date' would be exciting . He left me a postcard at home with instructions on when and where to meet. When I got home, I was tired and just wanted to put my feet up, and not in the right mood to discover a message on a mysterious postcard. I was also less than enthusiastic about catching a bus back into town. Obviously, I couldn't stand him up, but I felt a bit resentful at having to go out, and I felt really guilty about feeling so negative about his romantic gesture. So, by the time I arrived at our rendezvous, I was thoroughly grumpy and miserable. I think I burst into tears. Needless to say, he never tried anything like that again, poor man.

So yes, I've come to the conclusion that big surprises are not all they're cracked up to be. An unrequested gesture of love is a lovely thing - buying or making a present, suggesting a weekend away, making a meal or even a cup of tea, but the surprise is not the point. I'd rather have a meeting than an ambush. 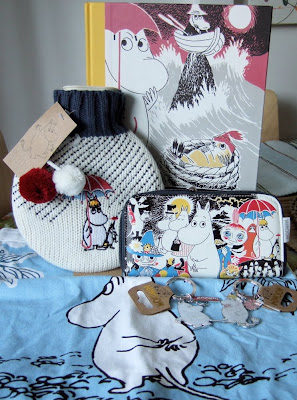 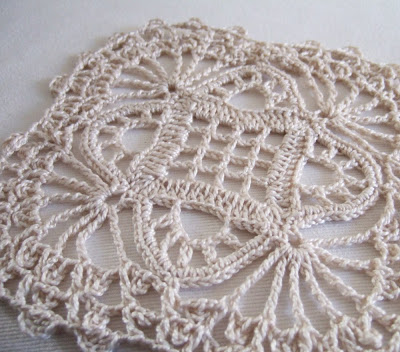 I hope you all had a wonderful Christmas and New Year. I'm back to work today, like most people, but I've actually felt quite keen to get back to making stuff and getting on with my new projects. This is a new feeling for me, especially at this time of year when I normally want to hibernate, so I'm feeling very hopeful about the New Year.

I was so keen, I had to do a bit of craft over the holidays, so I picked up my crochet hook, and played around with some patterns I hadn't tried before, like the square above. Perfect for being cosy on the sofa watching Christmas telly. And nice to make something just for the fun of it, with no particular purpose. 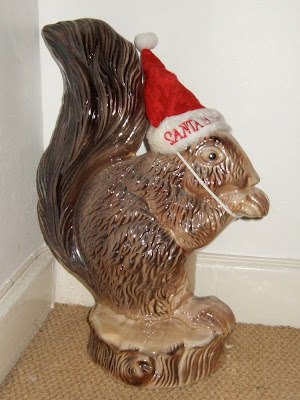 I'm sneaking in one last Christmas photo, because I had to show you our giant ceramic squirrel. He lives on the stairs and is called Mr Nuts. One morning before Christmas, much to my surprise and delight, I discovered that he'd got himself a Christmas hat! I laughed a lot! I think Mr Kitsch may have gone to the shops for him... 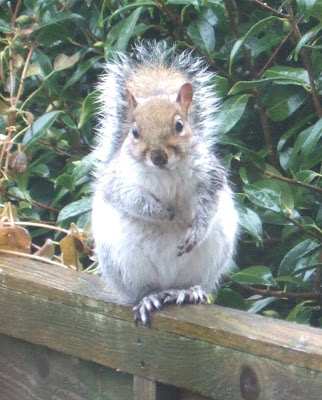 And we have some new squirrel friends in the garden. They are very good at looking extremely cute, so that we can't help but give them peanuts. And they seem pretty fearless, as this one stayed on the patio windowsill while I came quite close to take the photo. 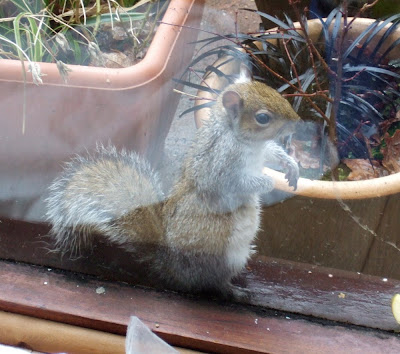