Last week was North Somerset Arts Week.  I didn't visit many places, but did go to see an exhibition by the Embroiderer's Guild. I'd bumped into a very friendly lady who was a member, and she'd told me about their workshops and the exhibition in the village hall in Cleeve. The standard of work there was amazing. Some of the stitching was teeny-tiny. I had to get my reading glasses out! (Yes, I am that old.)  Unfortunately I didn't get my camera out, so no photos, but there are obviously some very talented local members.

I am always drawn to textiles of all kinds, so was delighted to discover there was another textile exhibition in Cleeve - this one of weaving. (I really want to try some weaving, and was given a small loom for Christmas, but have yet to get to grips with it.) The extra-added-super-bonus was discovering it was attached to a small wool shop there that I didn't know about! It's called AlterKnit Universe and is utterly charming - full of lovely recycled yarn, locally produced alpaca and cute accessories. Their website is well worth a look.
They even have a yarn swap basket, where you can bring in a ball of yarn and swap it for a different one out of the basket. This might be just what I need, as I have a mountainous stash of yarn, and cannot possibly justify buying more.

My friend Rebecca was also exhibiting as part of the Arts Week, but unfortunately I didn't get as far as Loves Cafe in Weston-super-Mare to see her work. Her quirky prints combine the cute and the strange in a wonderful cartoony style.
So who needs the big city for art and culture?
Posted by Kitsch and Curious at 23:09 No comments:

Hello? Is anybody still there?

Now, where was I? I just popped away from my blog for a minute, got distracted, and now it appears three years have gone by. How does that happen?

I'm not really sure. I've posted occasional weirdness on the Kitsch and Curious Facebook page, and I have pinned like the very devil on Pinterest, but I just haven't really been in the mood to write much.
But now I'm here again, and I suppose I ought to keep you up to date. Well. a few things have changed since my last post. I've moved house, for one thing. Mr Kitsch and I decided to leave Bristol, and move a few miles away, to the lovely seaside town of Clevedon.  Well, I say 'seaside', but to be more accurate, the dull brown water we can just see from the window of our flat is actually the Bristol Channel. But Clevdon has a beach and a pier and seaweed and gulls and ice-cream, so I think that counts as the seaside. And it has great sunsets... 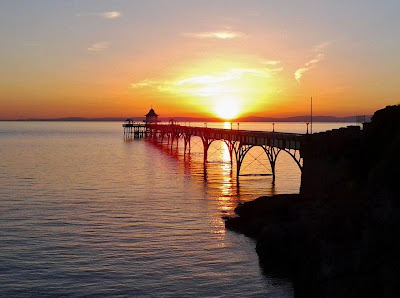 When we moved in 2013, my plan was to give up selling vintage and concentrate on handmade craft makings. Yes, well...somehow, that didn't happen, as I kept going through my endless collections and thinning them out. The local charity shops received a lot, but I've also sold some too. My Kitsch and Curious Etsy shop has waxed and waned depending on how ruthless I was feeling.

Our flat is small, and I don't have room to keep much stock, so I still intend to wind down the vintage shop eventually. I'll never be a minimalist, but as well as a lack of space, a lack of funds has made me reconsider some of my collecting habits. Paying for a storage unit, as we did for some time, makes you think long and hard about the value of keeping some bits of vintage kitsch, just for the hell of it.
So, although my shelves are still loaded,  I've reformed my vintage-collecting ways a fair bit in the last couple of years. But when I was feeling hard done by because I couldn't go vintage shopping, I received wonderful random things from people's attics or fabric stashes. Both from friends in blogland and in real life. You know who you are and I thank you.

I'm also immensely grateful for all the other support from family and friends in the past couple of years. Our financial situation has been up and down and is still a bit precarious, but we're still afloat. In some ways, I quite like the simplicity of not being able to spend money - there are less decisions to make. And we're not starving (far from it - as evidenced by my expanding waistline!).

I've been making textile jewellery and some other craft pieces, and I plan to have a new Etsy shop for those very soon. This photo is of some of the prototypes I made last year, but I think the newer ones are better. 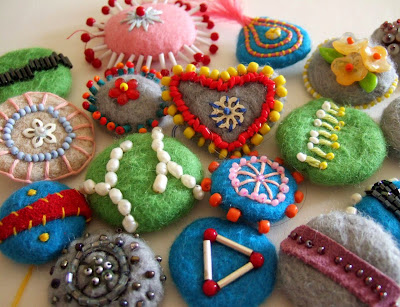 So now I feel ready to share my collecting and making again. But is there anybody out there to share with? I'd really appreciate a quick comment or 'Hello', if you've found this blog.
Posted by Kitsch and Curious at 17:29 4 comments: