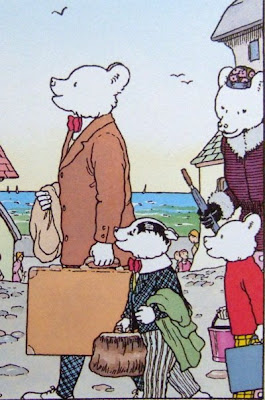 Posted by Kitsch and Curious at 00:40

We have had the most mangey one shambling around on our drive . . . but we only saw it once, more's the pity. I quite like the fact that they are around.x

Glad that you managed to discover the cause of these mysterious noises! I love badgers we are lucky enough to see them occassionally where we live.
Isabelle x

Thank-you for your sweet comment. I like to think of you being excited in Borders - I haven't found a copy anywhere up here - I could have left it open at the right page and loitered in a celebrity kind of way waiting to be asked for autographs..... HAHAHAHAHAAHAH! But I'm glad it made you happy!
A badger?! You lucky things! No cow farms nearby I hope! t.x

I must be lovely to have wildlife visit your garden. We don't have badgers, or foxes for that matter, in Guernsey, although you do see the odd hedgehog. I hope your pot recovers from his attentions.

Oh what a privilege... I would welcome Mr Brock in to our garden anytime...or Mr Tod..
I do occasionally here the owl in the trees next door but never get to see him..or her!

Hope you are having a very eggy Easter..