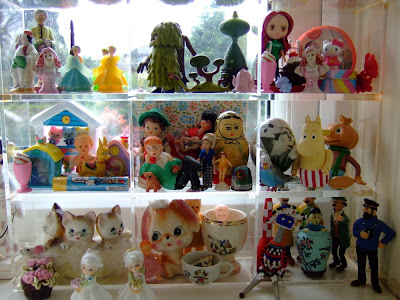 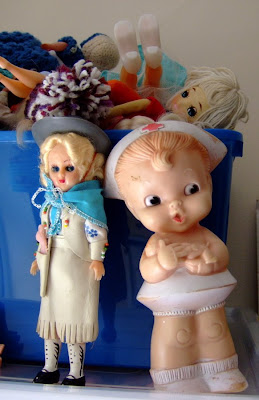 Better than that, I have a workroom that is calmer and less overwhelming. It's helping to clear some of the clutter from my mind, and I feel ready to complete some of those unfinished projects. I think I may have found my mojo...
Posted by Kitsch and Curious at 19:00

I know how you feel! I have just begun the decluttering of our home and it feels as if we are drowning in ‘stuff’. I was ruthless and decided that there were things I really didn’t love so they were donated to charity for someone else to love instead. I feel a bit better but there is certainly more to go. Alas there is no Ikea in Guernsey to help. Please post some photos of your newly arranged space – I might just get the inspiration and ideas I need to manage the rest of my mess!

Weldone you! I swear I get really anxious and stressed when my surroundings are messy/unorganised. Which is really hard cos I am messy person and have 3 kids! But I am just so much more relaxed when everything is cleared away!

Glad you are feeling better.

I am really pleased your 'old man' read the situation and took control!
Doesn't it all make things better when you have a good, cathartic clear or sort?
I hope you can see your projects through now. x

You are a very lucky girl to have such a wonderful husband. And your husband is lucky to have a woman who will admit defeat and ask for help when she needs it. Your organizing looks lovely and I can't believe you have so many of those wonderful books!

Hurrah for Mr Kitsch! I have had a HUGE clearout this weekend and now all the things I want to get rid of have taken over the kitschen and I am at a loss as to what to do next - hubby took one look and hot-tailed it to his shed! Suspect a trip to the local auction saleroom is on the cards, followed by a number of deliveries to charity shops! It does feel good though. LOVing those acrylic shelves! t.x

Well done! It is something I seriously need to do here.....Lizzie xxxx

a tidy desk = a tidy mind

I love it when your mojo comes back....congratulations and looking forward to seeing what it produces

I sometimes get that "overwhelmed by stuff" feeling but I lie down until it goes away! ;-)

Glad you got everything sorted& found your mojo again.

I can totally relate to too much stuff! Glad to see you are getting it under control and happy that you are posting again. I missed you