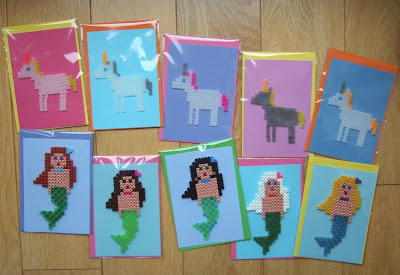 Quite a creative week last week, as I finished some pieces for The Mythical Beast Sweet Shoppe. This is an exciting exhibition being organised by the wonderfully talented Camilla of Made by Milla, as part of the Weston-super-Mare arts festival. The concept (originated in the States with the artist Edith Abeyta) is that "The shoppe will be home to artist multiples and one offs with a Mythical Beast theme, all alongside traditional sweets provided by local company Tizzy Treatz." Art and sweets? Fantastic!

I have to admit that I was a bit unsure about the 'Mythical Beast' theme. Mermaids and unicorns weren't my favourite things. But once I got to thinking about it, all sorts of ideas popped up. One idea I played with was making mermaids and unicorns from hama beads (a.k.a perler beads). Perhaps I could put together unicorn fun packs with badges? 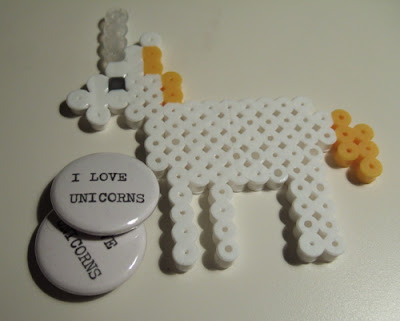 Umm... No. The next idea I worked on was primitive dolls that might have been made by mermaids for their merchildren in the past. I made a couple and hated them. Isn't this the ugliest mermaid you've ever seen? 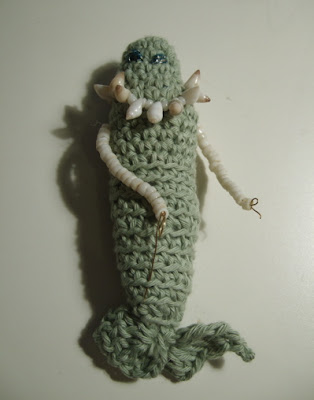 I haven't had the heart to put her in the bin, but she's headed that way.

However, at the same time I was collecting bits and bobs for the first concept I'd had, which was to make a box of artefacts or specimens 'on loan from the Museum of Mythical Beasts'. 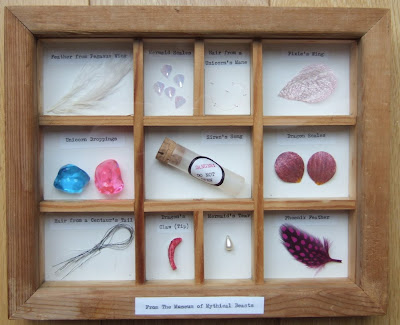 This box contains 'Mermaid Scales', a 'Dragon's Claw' and a 'Phoenix Feather', amongst other things. While I was working on this, another idea popped into my head. A variation on 'Pin the Tail on the Donkey' - 'Pin the Horn on the Unicorn'. Once, I'd thought of that, I had to draw it. 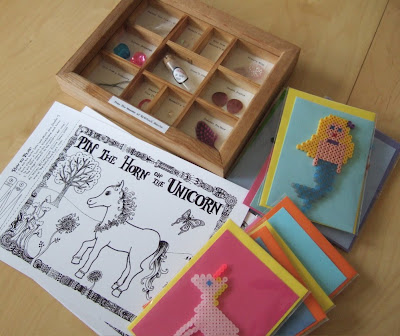 And finally, it occurred to me that the hama bead unicorns might make nice cards. It was all very rushed, as I'd managed to get the deadline date confused (yes, I am an idiot!), but it was good to get some pieces finished.

As I was late with my stuff, I decided to deliver the work to Camilla in Weston myself. I'd been meaning to meet up with her for ages, and despite her extreme busy-ness, she very kindly agreed. So yesterday, we went for an afternoon out in Weston (Mr Kitsch came as driver). Except we didn't go out really. It poured with rain all afternoon, and Camilla kept us supplied with cups of tea and lovely cake. (Obviously, I am a very poor blogger for not photographing the beautiful cake on the gorgeous vintage china, but quite frankly, I was far more preoccupied with stuffing my face. So no photo. But take my word for it, it looked beautiful and tasted even better!) She has so much wonderful art and kitsch in her home - I could have spent all day looking round. It was an extremely pleasant afternoon, and a big thank you to her for putting up with us!

We did manage to visit the venue for the Sweet Shoppe - a wonderful little black and white building by Birnbeck Pier (the very old pier in Weston, not the one that burnt down.) We got soaked, but what an amazing place! 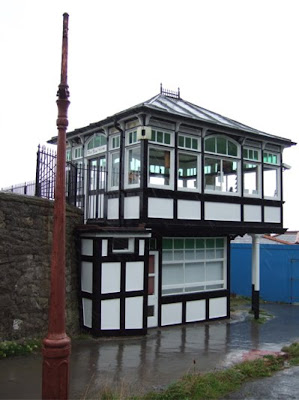 The exhibition is open every weekend from September 12th until October 11th, and there are lots of pieces by artists who are a lot better than me, so it will be worth a visit!
Posted by Kitsch and Curious at 22:26

Despite the rain, it sounds like you have a great time. I have not been to Weston for a long time.
Little mermaid looks sweet!
Isabelle x

the box of artefacts is genius and i love that little mermaid...cards are fabulous too....good luck with the show

thank you for visiting my blog, it would be lovely to see you at the new Bristol fair if you are not busy that day!
Lizzie x

I love the idea of the Museum of Mythical Beasts. Can we start one?

I have fond memories of Weston, mostly of being silly on the pier.

That mythical beast curio display is such a wonderful idea!

That mythical beast curio display is such a wonderful idea!