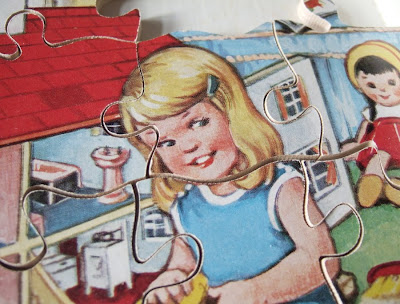 Isn't it odd how vintage things turn up together? Like buses, you wait for ages and then two come along at once. Recently, it was jigsaws. Not a thing I look for, particularly, unlike vintage china and fabric, say, which are always the first things to catch my eye. But I saw this "Educational" jigsaw puzzle (below) on Ebay, just by chance. 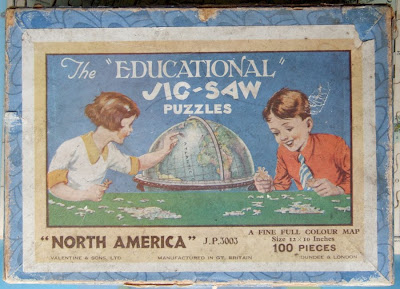 The price was okay and I liked the picture on the box, so I thought I'd bid.(It's an addiction, I tell you!) Anyway, I got it. It was fun putting it together. Mr Kitsch and I tested our geography skills! 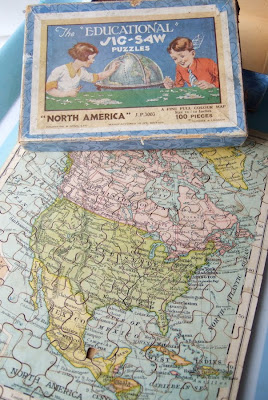 I must admit, I expected it to just show the USA, but I was forgetting that it was 'Made in Britain', where the important part of North America is Canada, that great pink swathe of the British Empire! And I think they only show Mexico so they can include British Honduras. (I had to look up what it's called now - Belize.) 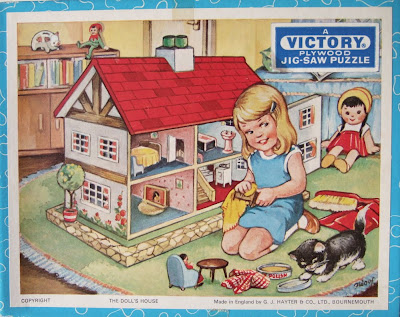 A couple of days after getting that puzzle, I found this beauty in a charity shop. My goodness, I can't tell you how much I love this picture. It's not just the great vintage style, or because the little girl is playing with a doll's house, or because there's a cute kitten in it, but because it's me.

This picture reminds me so much of the pictures I identified with as a little girl, where my mum would say "There's a little girl, just like you." It's really just because of the hair. I had very blonde hair as a child, and being quite thick, it always ended up in a bob, pretty much like that. The clothes too are very like what I wore. Mind you, I don't think I was ever industrious enough to polish the dollies' furniture!
Posted by Kitsch and Curious at 20:18

Old fashioned graphics like these two you found are always so heart-warming. It looks like all the pieces of the puzzle were included too, which is a bonus. I'm glad to hear that Canada was included on the North American map. You can find where I live on the western part of the "pink swathe" in the province of Alberta. (Sometimes the Americans seem to think they ARE North America, viewing Canada as just another quasi state but us Canadian folk are intelligent, talented and patriotic people who believe in our autonomy. Oh! and by the way, we are hosting the Winter Olympics in Vancouver, British Columbia ~ starting this week. Go Canada Go! .. ahem ~ excuse me .. I'm just getting ready for the Olympic hockey games ;)

Lovely! I really like the boxes for these, you do find some wonderful stuff don't you. I'm just about to email you in the hopes you've found something that may be useful to me...

It's a lovely image isn't it and very nostalgic for me too, reminds me of the dolls house I shared with my twin sister which housed all our Pippa dolls!