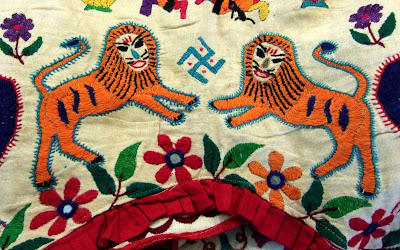 When Mr Kitsch and I go on an outing, we often call it 'an adventure'. It doesn't mean that we do anything particularly adventurous, but means that we approach the day with the outlook that things might not turn out exactly as we plan, but whatever happens it will be fun. There might be disappointments, but there might also be wonderful surprises - things you only get from taking things as they come. And so long as you accept it's 'an adventure', then you can enjoy it all.
Saturday was one of those days. I wanted to visit the Stroud Textile Festival. I've wanted to visit it for about four years running, but somehow never managed it. I had a look at what was going on, and there was a World Textile Fair at the village of Bisley on Saturday, as well as all the exhibitions in Stroud, so it seemed like a good day to go.


To get to Bisley, you have to drive all the way through Stroud (getting lost and doubling back on yourself  - optional) and then go through some beautiful countryside. The road was lined with frothy cow parsley and lush fields and trees on either side. Because we were finding our way, and looking at the scenery, it seemed like we were driving miles into the heart of the rural idyll. In fact it's only a few miles from Stroud, but it felt like a long way from anywhere. 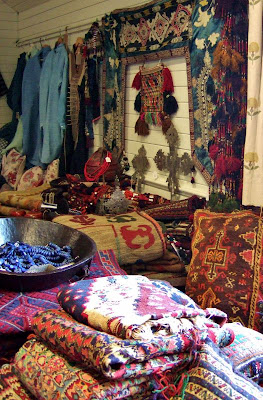 The fair was in the village hall, and although small, it was marvellous, with vivid embroideries from China and India, crisp French linen, Turkish kilims and Japanese kimonos. I like the setting of the English countryside for exotic textiles. Despite the contrast, it actually feels very traditional, and makes me think of retired colonels and tweedy ladies from the British Raj. I browsed the stalls, knowing I couldn't afford to buy anything, but just revelling in the colour, pattern and texture.
But then Mr Kitsch found this little cap. 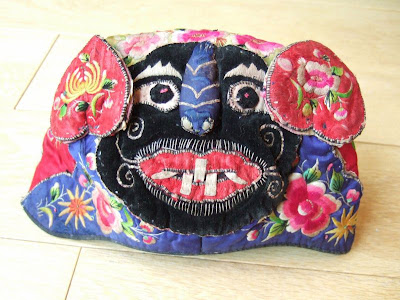 It's one of the wonderful things about Mr Kitsch that he has started to appreciate embroidery. He's also started to do it, for his 'Day of the Dead' inspired pictures, and annoyingly, he's very good at it too. So he understands my love of textiles and my love of quirky things and he knew I would love this piece. He loved it too. We had to have it.

It was £40. Too much, really, but we justified it by deciding it was an anniversary present to ourselves (our anniversary was the next day, Sunday). Stupidly, we hadn't brought any cash with us. We had about a fiver in change between us. No problem - Mr Kitsch volunteered to go and find a cash machine, while I stayed at the fair. I asked the man on the stall to put it aside for me, and he told me it was a baby's cap from the Bai people. The face on the top is a tiger, who is there to protect the baby from harm. Wonderful! I carried on looking round and taking photos. 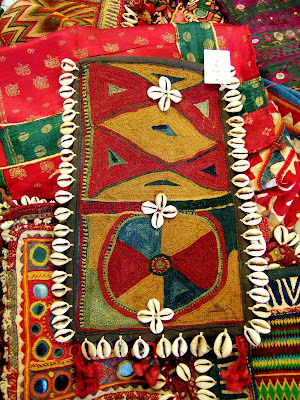 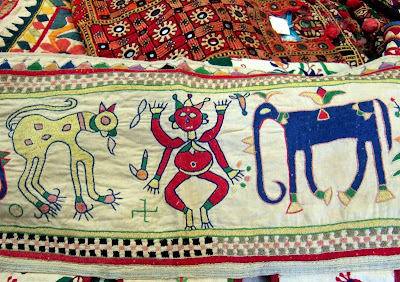 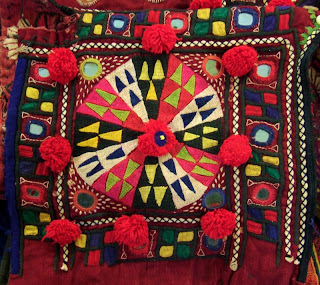 I took A LOT of photos. The minutes ticked past. I went and asked the girl on the door if she'd directed a man to a cashpoint. Yes, she showed me the map directing the way to a Londis shop in the village. Maybe he's walked there, I thought, and went to wait outside. Our car was not in the car park. Oh well, he won't be long then, and I went back in. More minutes ticked past. I tried to ring him, but couldn't get a signal in the hall. I went outside again and walked all round the hall. Still no signal. I saw a woman using a mobile phone, but even when I surreptitiously tried to stand right behind her, I still couldn't get a signal. I went back inside again. It was small village hall and I was starting to feel conspicuous. 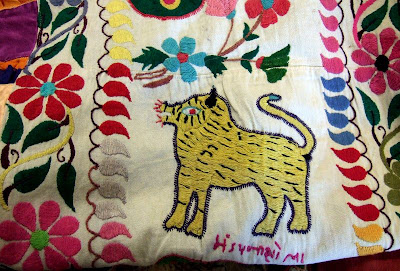 After another long wait, I finally saw the car returning and went outside to meet Mr K. The poor man had been on an expedition. He had followed the map, but had not found a Londis shop in Bisley. After driving round and round and checking every turning, he finally found a shop, and went in and asked if they had a cash machine. 'Yes....,' said the assistant, '...but it only works on weekdays.' Weekdays?? I know we were in deepest, darkest Gloucestershire, but a part-time cash machine? So Mr Kitsch drove on through the country lanes. It probably would have been quicker to go back to Stroud, but by this time he probably wouldn't have found it, so he just drove on and on to the next village, looking for a shop. Eventually he found a little post office.
'Can I get cash here?' No cash machine, but he could get cashback if he spent £5. He looked round the shop and in desperation he picked up a large Christmas box of Maltesers. Three pounds something. He added a large bag of toffee popcorn. Five pounds exactly.
'Forty pounds cashback, please.'
'I'm afraid our maximum is thirty pounds.'
Disaster! At this point Mr Kitsch remembered that he had a £10 note in his wallet. It would be okay. The shopkeeper opened his till.
'Oh dear, I haven't got enough cash in this till. Hang on.' Fortunately, there was another till in a tea shop at the back of the shop, and the man got the cash from his wife who was serving there.
Hoorah! Finally, clutching the essential cash, Mr Kitsch starts to leave the shop.
'Oh. Um...How do I get back to Bisley?'

He found his way, we had the cash, and the wonderful embroidered cap was ours. So now, as well as having a great piece of embroidered art, we'll remember the small adventure to buy it.

We carried on to Stroud to look at the textile exhibitions and the museum (parking in Stroud is an adventure, too), but I'll keep the photos for my next blog post. We had a brilliant day - it was just one of those days when we kept making each other laugh. I love that we can still do that after 22 years together. Mind you, after 22 years, you have to be able to take a joke (Boom! Boom!). So on Sunday, we decided we didn't need to go out for a posh meal for our anniversary, but had a Chinese takeaway (with a bottle of champagne that someone gave us as a present ages ago), and, now that I come to think about it, that was a perfect match for the mad embroidered tiger cap. Oh, and we had a box of Maltesers too. 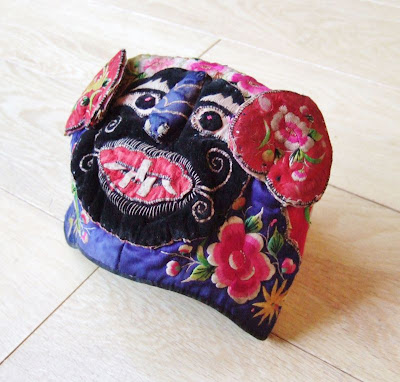 Posted by Kitsch and Curious at 16:50

Love the story behind the cap and the effort to get cash! Scarlett x

Your lovely cap will always remind you of your day out! By the way, I used to go to primary school in Bisley many moons ago.

Lovely story - you will remember your adventure every time you look at that amazing cap!

That really was an adventure. Your DH is very dedicated and sounds lovely. Gorgeous little cap also.

Happy Anniversary to you two! Great textiles and no wonder you wanted the little cap, its beautiful.

Re your comment about Tyntesfield: we went about 5 or 6 years ago when there was only a tent serving tea and cakes... and (yippee!) drawers still stuffed with stuff that the National Trust still had to "sort/catalogue" etc. It has all moved on, the billiard table room still has bats through the door at the far end, the orangery still has to be finished..... but they (the National Trust) seem to be doing it all in such a lovely laid back way...........
As a closet Goth, I cannot recommend it highly enough! :O)))))))))))

Brilliant tale (aka adventure) thank you for sharing! i wonder if you bought the cap from the guy who was on the stall next to me at the Glasto fair? He had done Bisley the previous weekend! xx