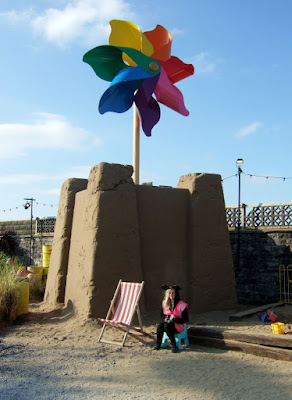 Guess where I've been? Unless you've been under a a very large rock wearing a blindfold and noise-cancelling headphones for the last few weeks, you will recognise that this is Dismaland, Banksy's new exhibition at Weston-super-Mare.
Weston is the next town along the coast from where I live, so I was extremely excited when the news broke about this. I loved the exhibition he put on in Bristol in 2009. (Funnily enough I never blogged about it at the time. I think I wrote something and never published it, although I did put some photos on Flickr.) I love the fact that Banksy still does these big events out here in the provinces, and doesn't forget his hometown.

In fact I was all geared up to try to go the locals' free preview, but as well as being a resident of North Somerset, I discovered you had to have a special coupon from the Weston newspaper, so I had to just buy a ticket like the rest of the known world. 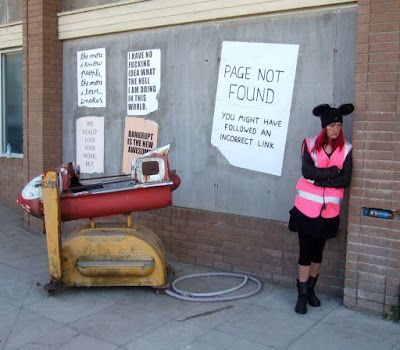 Although the dismal 'bemusement park' concept is Banksy's, and there are several large works by him, the majority of the work is by other artists. These other works complement Banksy's, because they fit the concept and/or share his political/satirical stance. (They include Damien Hurst, David Shrigley, Julie Burchill, Jimmy Cauty and many more.) So essentially we got treated to a major exhibition of contemporary art - in Weston!
And thousands of people bought tickets and queued up to see all this art. This is another thing I love about Banksy - he makes work that people want to see. It's funny and provocative, and not too subtle. In this interview, he compares it to music, and I think that's really valid - not everything has to be highbrow.

But at the same time as being popular, he has a subversive stance. All the nice middle-class visitors to Dismaland get to see the 'Comrades Advice Bureau', with stalls promoting Strike Magazine, Acorn, and selling tools to hack into bus shelter advertising. I think it's brilliant that he gives these non-profit organisations a massive opportunity to promote themselves.

﻿I didn't get photos of everything, so what I'm showing you is a little bit random. Predictably enough, some my favourite pieces involved textiles. This is cross-stitch embroidery on a car bonnet. 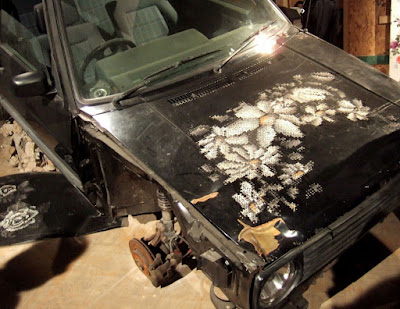 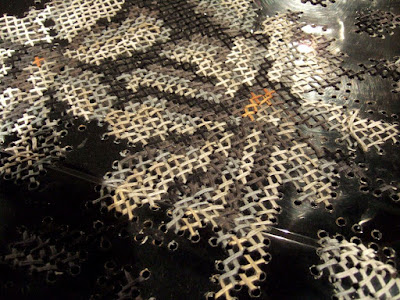 Extraordinary work by Severija Inčirauskaitė-Kriaunevičienė from Lithuania, referencing traditional embroidery from her region. 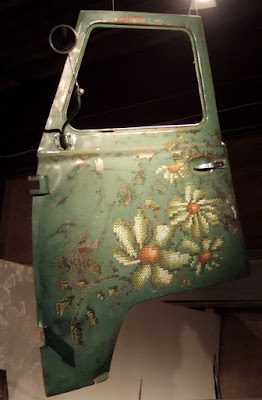 I liked this, but at the same time I'm a little bit unsure. Is it a bit too gimmicky? Not sure of the relationship between a car wreck and embroidery. I think I preferred the domestic reference of her embroidery on irons - more controlled cross stitch too. 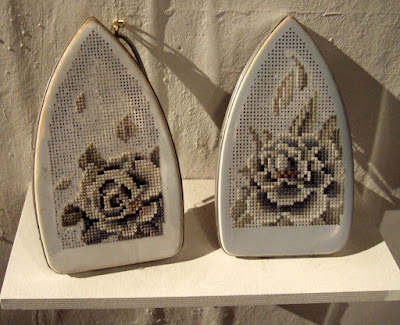 I really liked the colour and vigour of this large-scale painting by Barry Reigate. 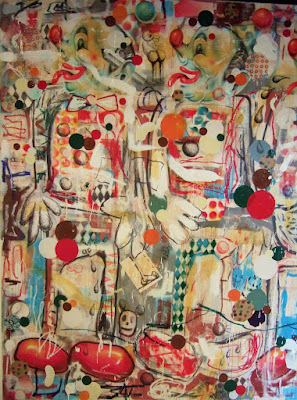 But some of my favourite things were not artworks at all, but the dilapidated old children's rides that were dotted about the place. (Trust me to choose vintage tat over everything else) 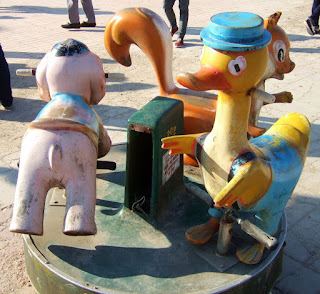 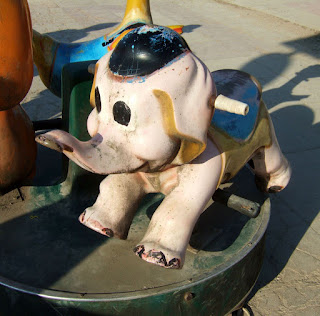 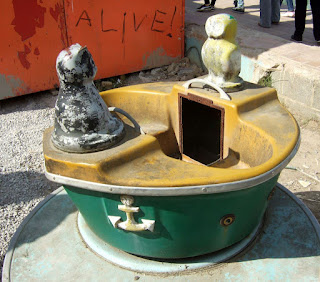 Outside the galleries, I found the air of dilapidation and misery a bit depressing at times, which I suppose was the general idea. It didn't help that I was a bit tired, and I'm never too happy in big crowds, but there did seem to be something a bit sad about hordes of people enjoying themselves in a crumbling concrete enclosure, with crappy sideshows, where the overall message was about what's wrong in this world.

Having said that, I did enjoy it, especially when we had a ride on the scarily-old and creaking ferris wheel ('Safer than Alton Towers', as one of the 'Notional Trust' guides told us). Definitely the best day out in Weston-super-Mare I've had for a long time! (And that includes the day we went on the pier and bought sombreros). Recommended. (The next batch of tickets goes on sale on the 16th.)

Posted by Kitsch and Curious at 22:23

Thanks so much for sharing these photos, I would have loved to have visited......and I loved those old children's rides too! X

Great to see your photos, wish I could have gone to see it in the flesh too..

Oh I didn't manage to make it to Dismaland, but went to Glastonbury this year and one of the areas called the Unfairground made reminded me of what I assume Dismaland would be like. Reading your post was the next best thing to going there.