In four weeks time, I will be taking part in the West Bristol Art Trail. Bristol has at least four Art Trails now, where artists open their homes and studios to the public for a weekend. They're really great - you get to see interesting art and can also have a bit of a nose round other people's houses! My house isn't quite in the area covered by the trail, so I'm exhibiting with several others in the Hope Community Church. (That'll save me tidying up!!)

I'm looking forward to it, but also very panicked that it's only four weeks away now. I don't have nearly enough work to show. I'll be showing my collage & assemblage. Like this one, called 'Black Thoughts of a Small Doll' (Titles are difficult!) 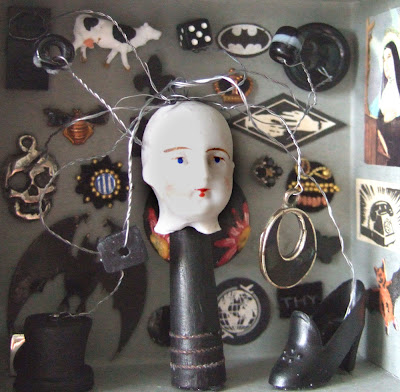 I've also been doing some painting lately. I probably won't include it in the Art Trail, as I didn't mention painting when they asked for my details for the programme. Also, I don't really think it will go with the other work, as I've been painting dolly portraits. Here's my painting of a Dolly Darling called 'Teeny Bikini on the Beach' 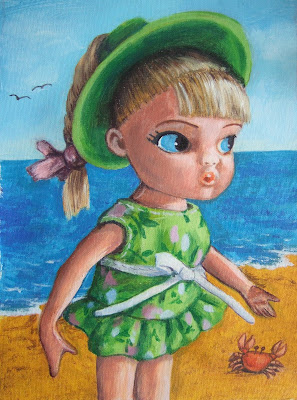 I've put photos of a couple of other paintings on Flickr. I really enjoyed doing them. I'd forgotten how much I enjoyed painting.
Posted by Kitsch and Curious at 23:52

I think the collage title is brilliant - adds humour to what could be a bit sinister - makes you look twice! Love it! Good luck with the art trail. Why don't you ask if you can include your pics to complement the other work? The more the merrier I say! t.x

I love this of the dolly darling. I have a friend on myspace that does paintings and art of kiddles. this reminds me of her work.