We've gone on holiday by mistake 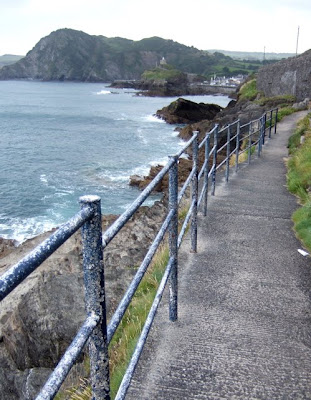 I have just returned from a few days away in the dark heart of Somerset.  Knowing we had no holiday planned, Mr Kitsch's parents kindly suggested we could stay in their house in Wiveliscombe, while they were away on holiday. London Friend was due to visit us at the same time, so after checking with all parties, we arranged to take her there for a couple of nights, and take a day trip to the North Devon coast. I had visions of Famous Five-style picnics and idyllic country charm...

As a non-driver, I am always navigator, and am generally told I do a pretty bang-up job. However, on this trip, I failed to take into account some of the local hazards. To start with, it seemed as if the drivers of every kind of large vehicle had collectively decided to test their skills in very narrow roads. We encountered dustbin lorries, caravans, buses, coaches, tractors, wide loads of hay, a cement mixer and even a vintage steam roller on tow.

By the time we got there, Mr Kitsch was already a bit frazzled. But after a short rest, he said he was up for a jaunt, and as it was the middle of the afternoon by this time, we decided not to go far - just to the local sights of Clatworthy Reservoir and Wimbleball Lake. At first, driving through all the country lanes was a joy - rosebay willow herb in flower on the high hedges, and the occasional glimpse of a valley through a gate. 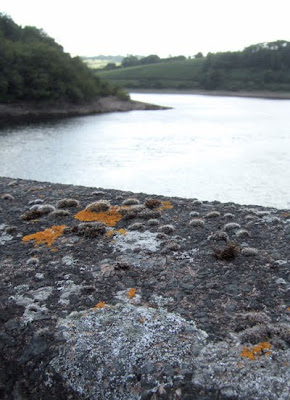 The reservoir had a dam, and the lake was... lake-y. Perfectly adequate as large bodies of water go, but nothing to put on a postcard home. So, thrill-seekers as we are, we decided to carry on in a circle round the lake on a 'scenic' route down the country lanes. Unfortunately, I had underestimated the twistiness and up-and-down-iness of the roads, and what appeared to be a short round trip actually turned into a never-ending roller-coaster of narrow lanes with nothing to see except hedges so tall they blocked out the ever-diminishing daylight. And endless, endless rosebay-bloody-willow-herb.

Every millimetre on the map turned into miles. As I was map-reader, the others kept asking hopefully if we were near home, and I had to reply, "No... just a little bit further," and watch their tired and wan faces collapse back into hopelessness. The sun started sinking and we thought wistfully of the Chinese takeaway we planned to have, as we toiled round each blind bend and 1-in-5 hill. When we finally got back to Wiveliscombe, you would think we had completed a round-the-world trip, the relief was so immense.

It says a lot for the resilience of the human spirit, that the next day, Mr Kitsch was still willing to drive the  hour and a half to Woolacombe and then to Ilfracombe. "The roads are much better" I told him, and he believed me. To be fair, a lot of the roads were better, but there are still a lot of A-roads that shrink to a bus width in places. It was still a roller-coaster, and this time we were coming back in total darkness. 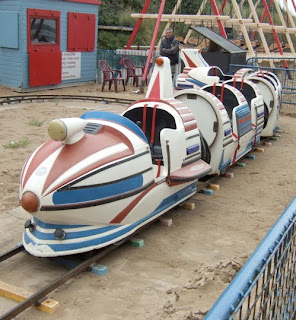 Our day at the coast was grey and dull and unbroken by any sunshine whatsoever. Both London Friend and I have injuries to our feet at the moment, so walking is not ideal. Trudging round in light drizzle does not make for happy campers. And I will gloss over the incident where I fell off a pavement giving myself a light smattering of grazes and bruises and damaging a brand new pair of trousers. 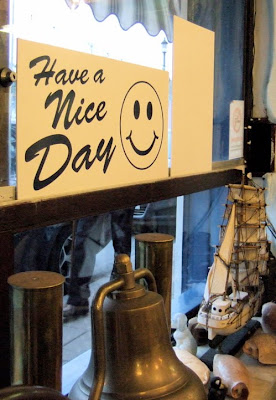 But there were good moments. There must have been, ooh... very nearly several times we enjoyed ourselves. They mostly involved food - cream tea, fudge, chips, the aforementioned Chinese takeaway... 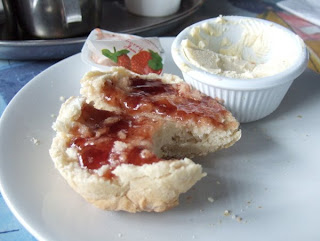 And if you are a country-dweller snorting in derision at the lack of stamina of us townies, I challenge you to make your way through the centre of Bristol in a Friday rush hour. Child's play in comparison!
Posted by Kitsch and Curious at 14:29

Now why didn't you say your were coming this way........I love in Minehead!
Julie xxxxxxxx
PS two of our sons live in Bristol too!

Elaine - I love this entry. Maybe you will look back on this in years to come and laugh....ha bloody ha.

Thanks! It wasn't really as bad as I make out, so yes, I'm laughing about it!

The fabric of my life said...

Hahaha you are funny Elaine. We have the twistiest, turniest lanes in North Devon and any journey anywhere takes forever!!!

These holidays are always the most memorable for all the wrong reasons!
I know just what you mean by the hazards of country lanes. The Devon lanes are always a white knuckle ride for me and I swear I age every time we visit.

Nothing better than whizzing down a country lane. We've got quite used to them now: you never know what adventure is around the next corner lol!