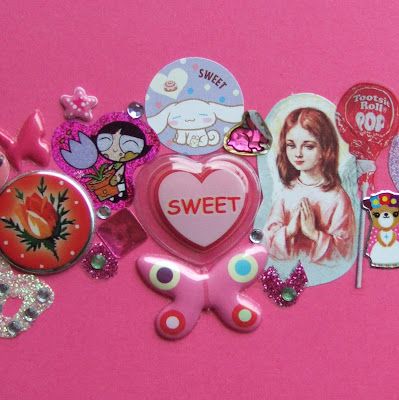 Twenty years ago (when he was a lot younger), Mr Kitsch received a valentine card. (No, it wasn't from me.) He had a girlfriend, but it wasn't from her. He didn't know who it was from. He used to do hospital radio at the time, and it had been sent to him there. He worked for BT, and started to suspect it might have been one the co-workers in his office. He started to compare the handwriting on the card with the writing of the girl who sat opposite him. He looked again and again at the handwriting, and spent a whole weekend trying to persuade himself that it was the same writing. Eventually he realised that he really, really wanted the valentine to be from the girl who sat opposite him.

He felt bad that he cared more for this girl at work than for his girlfriend, and asked his brother for advice. 'Go out with both of them,' his brother suggested. He couldn't do that. He realised that he didn't really care enough about his girlfriend and finished with her. He asked the girl who sat opposite him if she'd like to go out for a drink. She wasn't too sure at first. You see, she hadn't sent the valentine. But she went anyway, and they spent half the night having one of those getting-to-know-you talks that go into the wee small hours, because neither person wants it to end.

Much much later, when they'd been living together for some time, they found out that the valentine had been sent by a young girl at hospital radio who had a passing crush on Mr Kitsch. Oh yes - we're very grateful for that valentine!
Posted by Kitsch and Curious at 00:46

That story is an absolute DELIGHT! (As were the goodies that illustrated it). X

Great story...it was meant to be!

OH Oh OH! this is my FAVE valentines post! What a lovely story! t.x