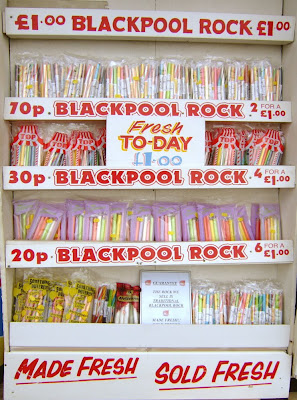 As part of our short sojourn 'Up North', we went for a day to Blackpool, as I hadn't been there since I was a teenager, and Mr Kitsch had never been there. Strange really, as we both love tacky British Seasidey-ness. 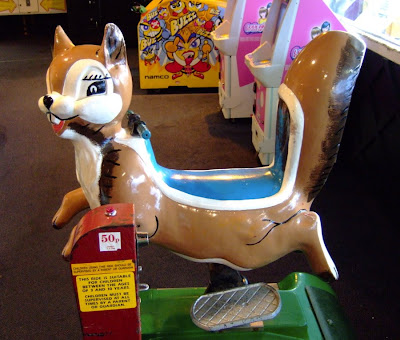 My first impression was "Weston-super-Mare on steroids", but that was before we experienced Blackpool Tower. I love being in high places, so the tower itself was great. They even had the dramatically-named "Walk of Faith", which was about four feet square of glass floor! (The one in the Spinnaker Tower in Portsmouth is rather more impressive.) 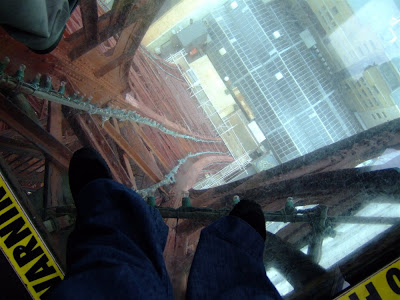 There's lots to see in Blackpool Tower - "The Jurassic Walk", with some jerkily-moving dinosaurs, the Charlie Caroli Exhibition (remember all those Bank Holiday Circuses on TV when we were little?), and various other amusements. But my favourite place of all was the Tower Ballroom. We just walked through an unmarked door and found ourselves in the balcony of this stunning palace of dance. 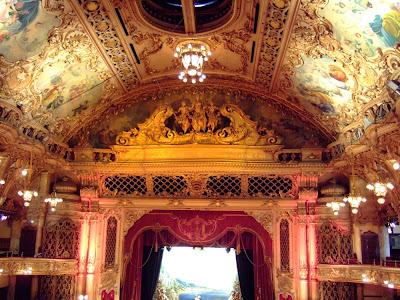 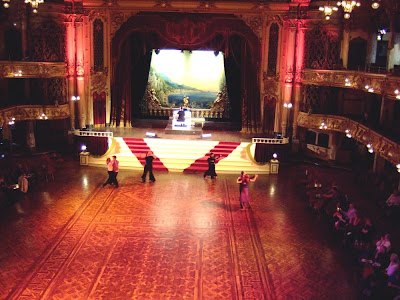 There was a Sunday afternoon tea dance going on, with some very impressive dancers. There was no 'getting up and having a go'. This was a serious business, and everyone there was step perfect. The most amazing thing I saw was an elderly couple, in their seventies, I'd say, who got up to do the rumba. I know very little about ballroom dancing, and this was not the fast dance I was expecting, but quite slow and sensual, with lots of balanced poses. To see this couple entwine themselves so beautifully around each other, and hold graceful, elegant poses, was a surprisingly moving experience. I wish I knew how to dance like that - I'm working on Mr Kitsch, but he's very reluctant! 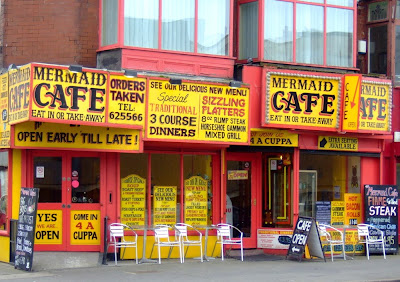 We had fish and chips, walked along the prom in a freezing gale, put 2p pieces in the cascade machines, failed to pick up a cuddly toy with a crane, and all those other seaside pleasures!! The other great highlight was seeing a demonstration of rock-making. (I've put photos on Flickr!) Brilliant!
Posted by Kitsch and Curious at 00:14

WOW! that ballroom, what a find! x

It was fantastic. We sat and had a cup of tea there, and I just didn't want to leave...

You have 'almost' made me want to visit ;-) Great post! Oh and the ballroom and dancers, WOW.

Living in beautiful Lancashire... means that we can go to lovely Blackpool often!
The Blackpool Tower is our family favourite, FOR SURE!
Thanks for sharing your wonderful photos!
Debbie Moss

How bizarre .. I was just thinking of seaside Kitsch before I set sight upon your blog..
It is what the Brits do best... gaudy and gorgeous!

I was meant to read this today and have a smile. I'm writing about my past (for my children) and have just been recalling the rock candy my grandfather used to give us when we were children...I've never been to Blackpool (never been to England -- yet!), but he'd bring us that candy and it was divine...we were the only kids in the neighbourhood who ever had it!

so much wonderful stuff here! t.x

I simply love that display of rock sweets. It feel like a display you might have seen in the 50's. Beautiful ballroom!
Isabelle x

Thanks everyone! I think I should go to the seaside more often!