Every now and again I think I'd like to have a shop. I see a nice little empty shop (there are so many of them now), and think to myself how I could make it into a fabulous little boutique. I would just sell 'lovely things'. And lots of lovely people would come and spend lots of lovely money.

OK, OK, I realise as a business plan, that's not the most hard-nosed proposal to put in front of the bank manager. It's nothing more than a sweet little pipe dream at the moment, and I've no idea if I'd ever really want to make it into anything concrete.

But I realised recently that, over the years, I've spent a fair bit of time selling my wares to unsuspecting strangers. I've done craft fairs, flea markets, comic & toy fairs, car boot sales, markets and sold to shops. Now it's Ebay and Etsy. Sometimes vintage (we used to just call it 'secondhand' when I started!), sometimes craft. So I suppose I've been doing 'Vintage and Handmade' in different guises for a long time, on and off.

One of the most miserable occupations on earth is to sit behind a table at a craft fair and sell nothing. I've been there and it's horrible. The tumbleweed blows through the unnaturally quiet church hall, and eventually an elderly couple in anoraks wander in. They walk past two stalls and then have to leave again through the sheer embarrassment of being the only punters in place. They probably came for the line dancing class, anyway, and just got the wrong day. Oh yes, I've been there...

But I forget that kind of selling horror when I start to look at shops. Perhaps I shouldn't. Perhaps I should remind myself of all that boredom waiting for customers. At least you avoid that with online shops and selling. But you have to keep taking things to the post office, which is a different kind of hell.

Oh well, for better or worse, I'm going to keep on with my 'virtual' shop-keeping. I'm planning a bit of a change to my online offerings, but in the mean time I've been adding lots of sweet and kitsch items to my Etsy shop.

I've been adding lots most days this month, and have managed to get 75 items still in the shop - this is the highest I've reached so far. I'm aiming for over 100, but I don't mind if I don't make it - it means these little treasures are selling!
UPDATE 15/3: The single dollies shown above have all gone, but I will be listing some more this week.
And somewhat in the mode of shop-keeper/curator, I've managed to get another Etsy treasury. Only this time I went a bit silly and went for the theme of 'Googly Eyes'. It'll never make the Etsy front page, I know, but it made me smile. (And on that subject, am I the only one who gets a bit bored of all those tasteful items in muted shades on the Etsy front page?) 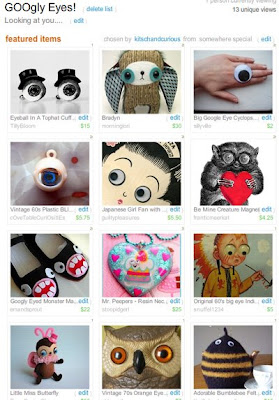 Posted by Kitsch and Curious at 22:06

I agree with you about the Treasuries! Lovely to see a bit of color now and then. Oh and I love the googly eyes :)

Having a shop is such a lovely idea but it is quite tying & how would you get out to find more lovely things?

Hi
It's a lovely thought which I too share. I get fed up with seeing all the same high street shops, where people buy things that you will see every where else. A vintage shop is Sooo much more interesting and individual! My Mother used to have a boutique when we lived in France and she was glad to give it up saying that what started up as fun became a chore. I will stick to my online shop when it eventually opens. I love fairs too but I too have experienced the deserted places. I am sure that the V & H fair will not experience such problems!
Isabelle x

A tea cosy with googly eyes ! Meanwhile , I hope your back's feeling better , ther's lots more kitsch to find out there .