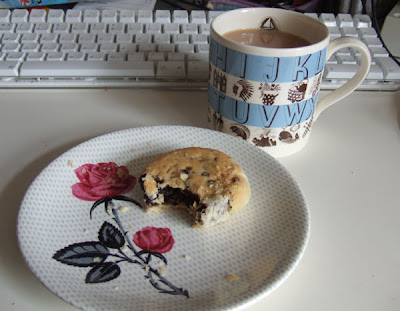 This is my snack this afternoon - a lovely cup of tea and an Eccles cake. (In case you're wondering the mug is a 1937 alphabet by Eric Ravilious, a British illustrator.) I had a good afternoon painting (a dolly portrait!), and then uploading photos. In the past few days, I've been getting to grips with Flickr. I didn't realise there were so many Etsy people and dolly people networking there. It makes sense for people in the visual arts to use a predominantly visual medium. Although I'd used Flickr in the past to share photos with family, I'd never used it to network at all. But like myspace, the temptation is to just keep finding friends, surfing sites, finding more friends, surfing sites, etc.. There are just so many cool people doing cool things out there! Well, I hope you have a look at my photostream http://www.flickr.com/photos/kitschandcurious/, despite the fear that you might end up endlessly surfing!

I've put my ebay buys on there. (Yeah,,,that whole stoppping spending money on ebay thing just isn't working out...) Also a few other sweet things I've acquired this week.
Posted by Kitsch and Curious at 21:35

Flickr is good, but if I had your cup and I'd just sit and gaze at that all day too! A genuine Ravilious for your cuppa! Now that's classy! t.x