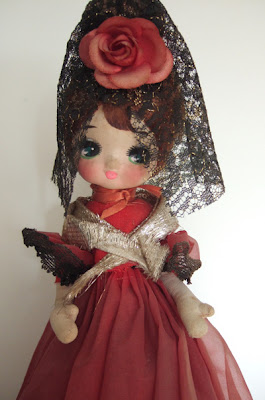 About ten years ago I found this doll. I can't even remember now where I got her. As well as being in Spanish costume, she's musical. When you wind up her base, she revolves slowly and the music box plays 'Love is a Many-Splendored Thing'. She was so kitsch, and I found her quite amusing. She stayed on a high shelf for ages, then I had a change around, but I decided I couldn't part with her. I looked at her again, and decided that she was so cute, I would put her in the bedroom, next to my jewellery and so on.

And then, the more I saw her, the more I liked her. She became one of my favourite things.

Earlier this year, I started putting pictures of dolls on myspace. I wrote a bit about this doll, but said I knew nothing about what she was, or where she came from. Well, that inspired me to find out more. I was looking at dolls on Ebay, and I saw a similar doll described as a Pose Doll. I googled it, and found some sites and blogs (one of them being the wonderful Reyney). I found that some were called Bradley dolls and I searched for that, and found more. I found pictures of super-cute dollies, lovely dolls in cute 'mod' dresses - all with those amazing eyes. And I discovered there were lots of people out there who love these dolls, and collect them.

So I've started to look for them on Ebay and Etsy. I bought a few cheap ones and got more interested. I bought a beautiful doll from shop66 on Etsy. I keep looking out for them.

And then I saw this doll on Ebay. It was like being struck by lightning. I recognised her as a doll my sister had when I was little. I thought she was beautiful, but I was never allowed to play with her. I'd forgotten all about her, and would never have remembered if I hadn't seen the photo, but now it all came flooding back. I never realised that I had already seen a pose doll all those years ago. She must have stayed in my memory somewhere.

I didn't buy the doll on Ebay - it was very dirty and overpriced, and I'm hoping my sister still has her original one somewhere, but I suspect she has gone to the dolly's graveyard...
Posted by Kitsch and Curious at 22:57

Cute story! I actually had a few of the Southern Belles as a child - they were my grandmothers - and then I became a teenager and hated them- we probably sold them at a garage sale or something! I've only been seriously collecting these for about a year! I have way too many now!