Threads that bind us 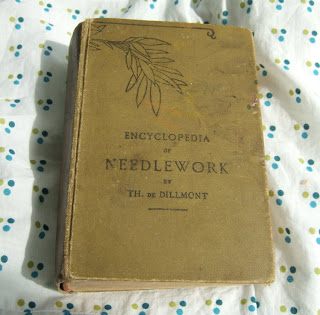 Yesterday Mr Kitsch and I celebrated our 21st anniversary. Amongst other presents, he gave me this wonderful old book. I can't tell you how much I love it.  This 'Encyclopedia of Needlework' is a small, chunky book, with over 800 pages packed with dense type, beautiful engraved illustrations and colour plates. There's no date on it, but I would guess it was published in the early 1900s, perhaps. 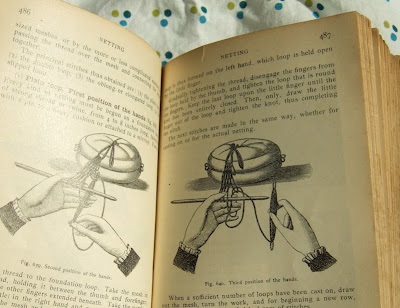 As I started to leaf through it, I got more and more excited by the sheer number of different techniques. Italian embroidery, Moroccan embroidery, Persian, Serbian, Hungarian and Maltese embroidery.

I know of Tunisian crochet, but Bosnian crochet and hairpin crochet? I always thought tapestry was a bit dull - cross stitch and petit point, and maybe a few more, but this book has 40 different tapestry stitches. 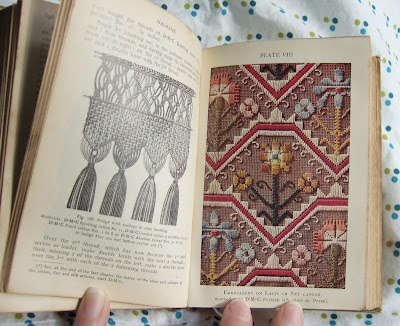 And then there's the language -
"The mending of wearing apparel and house and under-linen, though often a wearisome task, is yet a necessity to which every feminine hand ought to be carefully trained."
"Tattted trimmings worked in coarse materials may be classed rather among gimps and galoons than among laces." 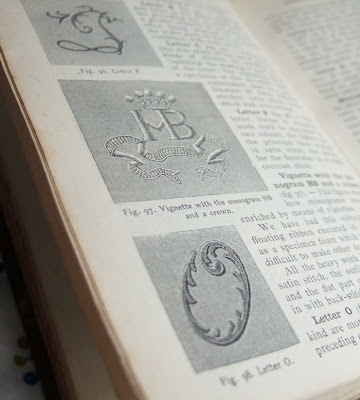 and the rather scary advice -
"To preserve needles from rust, put a little asbestos powder in the packets. People with damp hands which make needles sticky in usage, will do well to keep a small box of the powder by them, and dip their fingers occasionally in it." 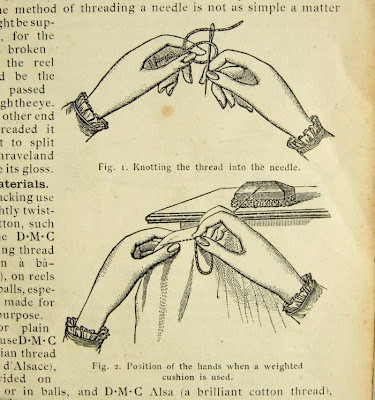 The list of thread colours at the back of the book is poetry. Just look at those shades of grey - 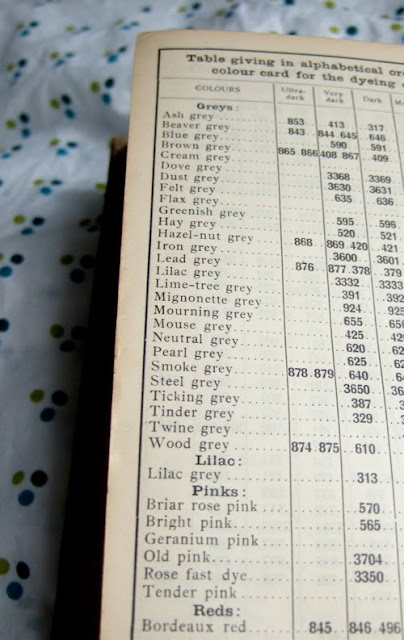 I want to try out so many of the patterns and techniques, but I don't suppose I can produce anything as exquisite as these illustrations. 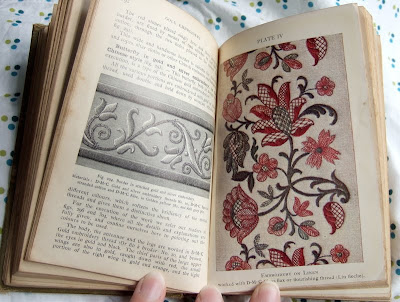 I think Mr Kitsch was rather taken aback at just how excited and delighted I was by this little book. I got him books about space, so I think he was very pleased too (he seems so in his blog). They may not seem like the most romantic presents, but I think it's loving and thoughtful to understand each other's interests and obsessions. And so we're both very happy.
Posted by Kitsch and Curious at 23:45

Happy Anniversary to you! I think the gifts are sweet! Love that book! Have a lovely week!

I have that book too. It is exquisite, isn't it? I used to look at it as a child and wonder at it. It's the thinness of the pages and the techniques.....

I believe that different editions exist. I remember as a child that in the crochet section there were the instructions for those d'oylies that have swans raised up from them. My book which I bought via E Bay doesn't have them. I mentioned this at college and my tutor (an embroiderer) said she also had the same book, but that different editions exist. Your photos back this up because the illustrations of the netting are on pages 470 and 471 in my copy.

The trimmings section fascinates me. What a gift to get! Well done Mr K.........

How fascinating! Have just checked the part about preserving needles in my copy and there is no mention of asbestos:

"To preserve needles from rust keep a little powdered stone alum in the packets, and a little box of it will be found useful in case of damp hands for powdering them with".

Happy Anniversary! What a great book. It looks fascinating.
x

Thank you all!
Cathy - how marvellous that you have the book too!
Mine says 940, 000 copies issued, so it must be a later one. No swan d'oyleys, either. (I always thought it should be doily, they spell it as d'oyley. I'm intrigued.)

They probably kept reissuing it for years, so my copy might have been published a lot later than the original. I guessed at the date from the knitting section, which says that knitting is mainly for sock and stockings (no jumpers for ladies), but could be used for 'motor scarves'.
Brilliant!

I just did a bit of investigating - there was a new edition of this book published as late as 1998!

And there's a website which reproduces the whole thing (a slightly different version to mine, though)
http://encyclopediaofneedlework.com/index.htm