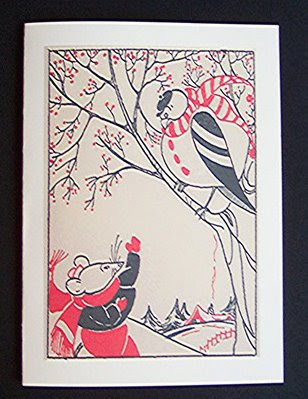 Just a warning before you start, this story doesn't have a happy ending... (However, the happy pic above is a lovely card by thelittlechickadee on etsy.)

Last December a rat appeared in our garden. Mr Kitsch decided he was 'The Christmas Rat', and so, instead of being vermin, he became just one of the friendly visitors to our garden. (My vague memory now is that he was wearing a santa hat and a velvet waistcoat, but I may just be imagining that...)

All the creatures in the garden have names. Sammy (and sometimes Sally) Squirrel, Mr and Mrs Blackbird, Robbie (the robin), Maggie (Magpie), Jay-Z (1st jay) and Jay Vydelingum (2nd jay), Tommy (one tit), Babs (for a pair - yes, we watch too many Carry-on films!), Donald the dunnock, Charlie the crow. And then there are the wood pigeons - Limpy, Little Limpy, Lieutenant Pigeon, Young Un and Ledgy (who only eats peanuts off the window ledge). The names just attach themselves, as good names should.

The Christmas Rat came and went. We live in the suburbs, near woods and wild spaces, so you're bound to get the odd one. I don't mind them at all, so long as they stay in the garden. Then last month, another rat appeared in the garden. The Christmas Rat has come early, we thought. But this time, she brought her family. She (I'm sure it's the mother) must have had a nest, and soon six little baby rats appeared on our lawn. They were actually very sweet, but seven rats in a small garden is a bit much. Our neighbour was very unhappy about them, called in the rat man and put poison down.

We went and got a humane/cage trap, but the rats wouldn't go near it. We changed the location, still nothing. We tried to hide it where they normally ran, they ran a different way. We put it right outside where we thought they were nesting and cleverly disguised it with old fabric. They steered clear. We put a trail of nuts into the cage. They ate all the nuts as far as they could without setting off the trap. We put some cardboard inside, in case it was the wire bars putting them off. They pulled out the card and ate that. We were starting to feel like Wile E Coyote setting Acme traps for the Roadrunner.

So we gave in and called the rat man. By the time he came on Friday, we had already found one dead rat, who must have eaten the poison from our neighbours garden, and we hadn't seen the others for a couple of days. The rat man gave us lots of advice, but basically the only thing you can do is to put down poison. We gave in and agreed, very reluctantly. I'm very sad about it. I feel like a murderer...
Posted by Kitsch and Curious at 23:18

Thank you for your lovely comments, very much appreciated.
Rats ~ every year we too have at least one nest. Each time the Pest Control Officer has to be called out, as we have dogs and chickens (the reason the rats love us) and can't run the risk of deseases being picked up. I understand completely what you are saying, as poisoning creatures is not in our nature, I too hate doing it. x