Good grief. (In a Charlie Brown voice.) I just discovered I'd been sitting on a chocolate raisin, and I have chocolate smears all over my (black) office chair. Nice.

I've just spent two days tidying up my workroom. OK, not two solid days, but many hours of both days. My room is tiny, but packed full of stuff, and I'd got to the point where I couldn't move. I didn't even have much space to work any more. I don't know why, but I've got a bit carried away by dolls this year. I've been collecting what I call 'my dollies' for a few years, but I used to limit myself to 'grown-up' dolls. Kachina dolls, Day of the Dead dolls, Indian folk art, various figures & art from around the world. I still love these, but then then earlier this year, I started buying vintage plastic dolls on ebay.

I spotted a few dolls I used to have, and decided to give in to that irrational, childish desire to have them. Then I found more and more appealing old dolls, and relatively cheap too. I realised that if I bought collections of dolls, I could get them cheaper, and I started to use them in my art/craft work. I also discovered that some dolls were worth reselling, and started to do that. (To be honest, it's not my best idea, as money-making schemes go, but it's fun.) So now I have boxes and boxes of dolls, and every shelf in my workroom is covered with dolls and kitsch. It's great, but it's getting in the way. I feel like an addict whose addiction is messing up her life! 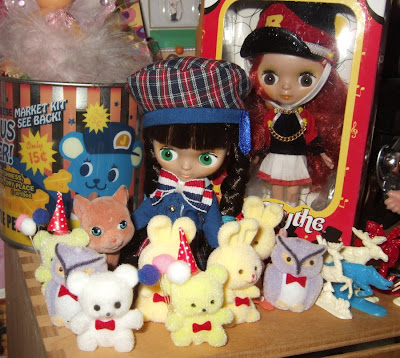 One of the things I also started, earlier this year, was a blog on myspace about dolls. I started off with Doll of the Day, but soon changed it to 'Doll of the Week'! It's usually inspired by whatever doll I've been photographing, whether from my collection, or a doll I was selling. Anyway, I've now transferred it to blogger. I'm using blogs from the archive for this month, and then I'll start all-new entries in January. It's often quite silly, but I hope you have a read. 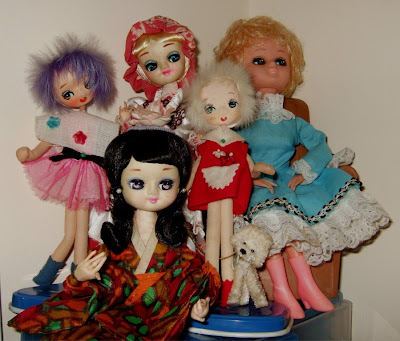 So believe it or not, these photos are the 'After' pictures in my workroom. I've now had a big tidy-up and a sort-out. I feel better for it. I'm going to make an effort to sell off lots of the dolls I don't need. Watch this space.
Posted by Kitsch and Curious at 00:46

Wow, what a collection.