I know lots of my blog contacts are fans of vintage children's illustration and the like, so I'm sure many of you will be as sad as I am to hear of the death yesterday of Oliver Postgate, the creator (with Peter Firmin) of so many wonderful children's TV programmes. Most news reports (like this one) concentrated on Bagpuss, The Clangers and Ivor the Engine. 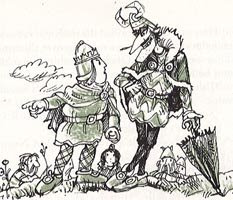 But my favourite is Noggin the Nog, (seen here with his arch-enemy, Nogbad the Bad). The stories were a Norse Saga, wonderful, atmospheric tales of the frozen North, with dragons and mountains, and a sort of tame cormorant called Grakulus.

Postgate also created Pogle's Wood, another strange series from the 1960s, with a haunting atmosphere, which I can only just remember, but I know it transfixed me for some reason, when I was little. 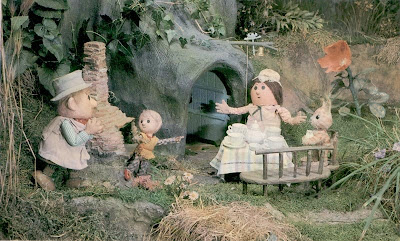 On his website, Oliver Postgate wrote various opinion pieces on modern life, including this one, which laments how commercial corporation thinking has caused the loss of creativity in children's television.

You have to wonder if anything quite like Noggin the Nog could be created today...
Posted by Kitsch and Curious at 23:05

I have very fond memories of Noggin the Nog and Ivor the Engine... classics that belonged to another era!